Many of us have come face to face with a lion – peering through the glass of a museum diorama, that is. Planted in front of a natural history exhibit, a museum visitor may feel as if they were actually standing on a dusty desert plain, staring down at a gazelle, or up to their shins in fresh snow, close enough to smell the warm breath of a snow leopard.

When we dream, it’s easy to forget that someone must have conceptualized all the details we see: the arrangement of flora and fauna, the posture of each creature, the overall mood of each scene.

But in fact, natural history exhibits are as prone to technical error and cultural bias as any other human endeavour. This theme runs through “Recapturing the Scenic Wilds”, an exhibition in progress at the Glyndor Gallery in Wave Hill, a 28-acre estate overlooking the Hudson River in the Bronx.

“Many of the artists in this exhibit explore how natural history exhibits balance the roles of education and entertainment,” said David Borgonjon, a Wave Hill curator who helped develop the exhibit. He noted that the exhibit pays homage to one of America’s most theatrical conservationists, Theodore Roosevelt, who once lived on Wave Hill.

Lori Nix, Richard Barnes and Hugues Hayden are among the nine artists whose pieces feature in the exhibition. For many, natural history dioramas conjure up the experience of witnessing a wilderness habitat, but Nix, Barnes, and Hayden know that it’s actually more of a second-hand experience, if not third or fourth. Because they are artists, they are used to evaluating the patterns, conscious or not, that go into visual displays. In one round table at Wave Hill in November, titled “The Power of Natural History,” they dissected that line between art and current events in natural history exhibits.

Nix, a photographer, posted whimsical shots of miniature dioramas in progress. With humour, his pieces highlight the mundane aspects behind the construction of such grandiose spectacles. One photo features an arctic scene with caribou and wolves – majestic except for the snowmobile parked out front. A photo of a room full of stuffed birds shows a bucket of Kentucky Fried Chicken sitting on the desk. In a pond diorama, half-assembled ducks are strewn about, a sign that casually reads “bird here?” nailed on some cattails.

Nix said she wanted to explore the mechanics of designing and building a natural history diorama — and, in particular, what can go wrong along the way. “As viewers, we believe that natural history exhibits should be real. We are in a museum, so we have to take these exhibits seriously,” she said. “My work pokes fun at that idea.”

Barnes’ work is darker. The exhibition features three pieces from his “Animal Logic” series, which brings together photographs of museum exhibits undergoing renovation. Perhaps the most striking photo is of a giraffe lowered by its neck in a diorama at the California Academy of Sciences in San Francisco. It translates a laborious, even a little violent process: the head of the giraffe is wrapped in opaque plastic; her neck, held by a crane, arches backwards with a rope wrapped around her throat. 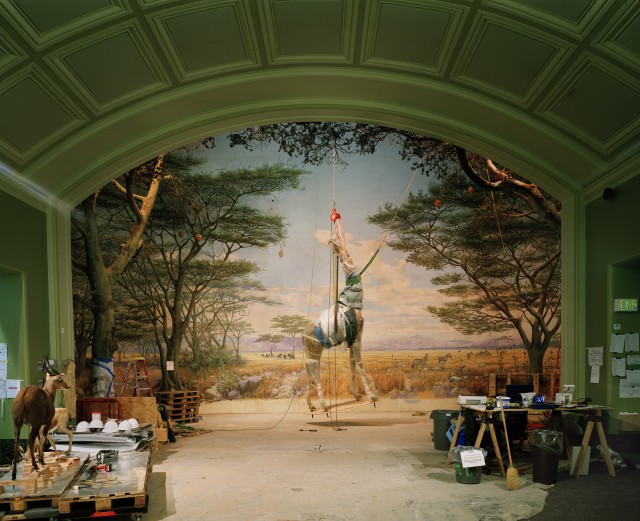 Barnes was particularly struck by the idea of ​​scientists going into the field, killing an animal, bringing it back inside, and reanimating the corpse on a carefully constructed set. It’s perverted, but exciting, he says. “As an artist interested in artifice and theatricality, it was a gateway. I wanted to explore how we look at the natural world in these dioramas – how we suspend disbelief.

In another room, Hayden braided the fur of a stuffed black bear. Reinterpreting the black bear as a symbol of American masculinity, the piece explores what happens when we manipulate the bear’s appearance through coded action with cultural and social connotations. By feminizing and undermining black bear aggression, braids challenge our cultural assumptions. 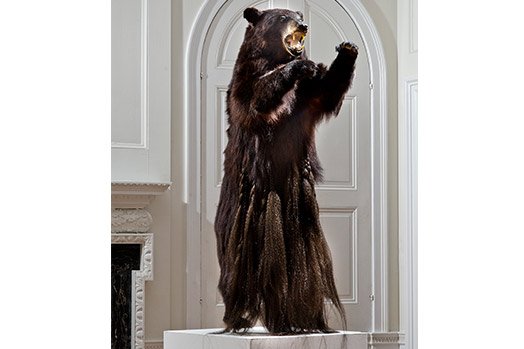 “A lot of my artwork – whether it’s using skin, feathers, tree bark, fur – is concerned with the manipulation of organs of identification,” Hayden said. . He drew parallels between our constructed perceptions of animals and the cultural constructs we have within our own society. Practices like braiding and lengthening hair can be a way for people to manipulate their identity, he said.

Borgonjon hopes the exhibit challenges visitors’ understanding of what it means for something to be wild. The example of the domestic pigeon is telling, he said, pointing out that we don’t consider the bird wild enough to be displayed in a natural history exhibit.

“We often think of cities as being built and wilderness being real,” he said. “But much of the art in this exhibit suggests the opposite may be true: we construct artificial ideas of nature, while encountering real examples of wilderness in cities every day.”