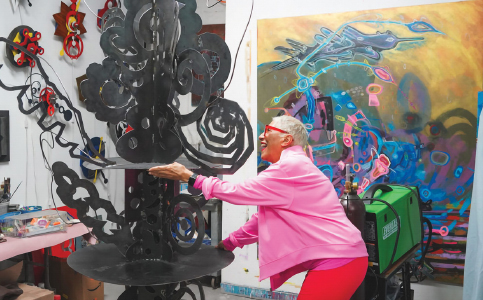 Local art museums continue to fill the void that the artistic community has endured over the past two years.

Christo (Christo Vladmirov Javacheff) and his wife Jeanne-Claude have marked the history of art since the middle of the 20th century.

Visitors can still view “Mariano: Variations on a Theme”. Widely known simply as “Mariano”, the artist is considered one of the most important painters of the segunda vanguardia – the second generation of Cuban modernists who in the 1940s and 1950s used their work to build and express their vision of the essence. of Cuban national identity. The exhibition ends on January 22, 2023.

Opening November 29, PAMM is set to present the first monographic exhibition of the work of Leandro Erlich in North America, under the title “Leandro Erlich: Liminal”. Selected and curated by New York-based guest curator Dan Cameron, the exhibition will feature 16 works that span over two decades of Erlich’s output.

Arranged in PAMM’s special exhibition galleries, the exhibition was designed to suggest an underlying narrative scenario, guiding viewers through a series of encounters that act cumulatively to introduce doubt into their own sensory input into the spaces around them.

ICA, Miami presents “Progressive Aesthetics”, the first American museum investigation for Michel Majerus, which explores the late artist’s work by taking up his rich and varied interpretations of capitalism and cultural imperialism as they relate to art in American culture. Created on the threshold of the 21st century, his works deal with themes of transformation and are characterized by a fascination with speed, openness and transmission.

The museum is setting up “Hervé Télémaque: 1959-1964”, which brings together more than a dozen paintings from the first five years of the artist’s production.

Based on an exhibition and research practice consisting of delving into significant periods in the artists’ careers, ICA Miami takes a deep and definitive look at Télémaque’s early works.

Next up is “Big Butch Energy” with a new installation by Nina Chanel Abney, whose works of painting and sculpture use dynamic colors and shapes to draw viewers into complex narratives. In these latest works, Abney explores how the perception and performance of gender is informed by the legacy of social rituals and the circulation of visual culture.

The Bass Museum of Art at 2100 Collins Ave. in Miami Beach presents Absence Revealed, an exhibition featuring a new series by experimental photographic artist María Martínez-Cañas, on view through October 23.

The new works were born out of two events in the artist’s life, the loss of his mother and the chance discovery of his home’s original 1920s wallpaper during renovations. The works highlight the physical and emotional processes of excavation and the act of revealing and discovering, as well as the arising of pain, loss and absence.

“Phraseology”, a new exhibition that explores language in modern and contemporary art will run until April 23, 2023. The exhibition features works from The Bass Collection and works on loan.

“Charo Oquet’s I am here: Translation of Mystic Symbols in an Age of New Subjectivity”, is the next winner of the museum’s “New Monuments” open call for artists cycle, a project supported by the John S. and James Foundation L. Knight through the museum’s Knight Art Commissions program.

Installed in Collins Park, the temporary, site-specific monument to Oquet will be on view until January. An interdisciplinary artist born in the Dominican Republic and based in Miami, Oquet is known for his dynamic installations that incorporate idiomatic cultural practices from religion and Afro-Caribbean folk traditions.

The Museum of Contemporary Art, North Miami (MOCA) at 770 NE 125th St. has extended its “My Name is Maryan” exhibit through October 22. Curated by Alison M. Gingeras, the exhibition is a monographic presentation of four decades of paintings, sculptures, drawings and films by Polish-born artist Maryan.

“My Name is Maryan” is the first retrospective to holistically examine all periods of Maryan’s life and work. Throughout the museum, Maryan’s biography and prolific body of work stand as a deeply moving monument to the perseverance of the human spirit and the power of art to overcome traumatic loss.

The Wolfsonian-FIU at 1001 Washington Ave. in Miami Beach has two exhibits opening October 28.

“Plotting Power: Maps and the Modern Age” follows the use of map-like images for political, commercial and other purposes in the early 20th century, when the possibilities of travel and technology opened new horizons for the global ambition.

Featuring items from the Wolfsonian collection, including paintings, prints, posters, industrial design and graphic materials, the exhibition traces how maps and other representations of geography were shaped by design strategies, various agendas and iconic stories from modern history.

“Turn the Beat Around” will trace the explosion of collaborative creativity driven by Hollywood musicals, American dance studios and Cuban artists, bringing to life the musical fusion found between cultures.